It's working! My fab guy mounted the shredder up and put some chain tensioners on it. It's working alright. The biggest issues right now are that the upper chain tensioner is spring mounted (was supposed to be solid mounted) and that the shredder is close enough that I really have to watch my knees. I slid the saddle back a little to reduce the risk of injury!

I can't shred much of anything until that tensioner is mounted solidly but I'll be bringing this to the farmer's market tomorrow to show it off. Some finishing touches will come this week, including a chain guard over that huge 65 tooth dinner plate chainring!
on September 15, 2018 1 comment: 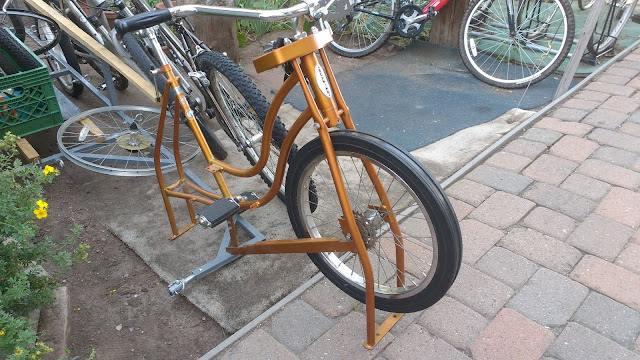 I stopped into Bici Mundo yesterday to check up on the Schwinn Exerciser. Everyone there has been very helpful with this project. To recap, we are running a 28 tooth chainring at the crank straight forward to the big ring on a five speed freewheel. Then another chain will go from the 14 tooth cog on the freewheel straight up to a 65 tooth chainring on the shredder itself mounted near the 'dashboard'.

Thankfully, the five speed freewheel has been mounted on the wheel where only a single speed cog used to be! Susan had to move the axle over and re-dish the wheel to make it happen. Thankfully she was the one working so we got to work on it together. 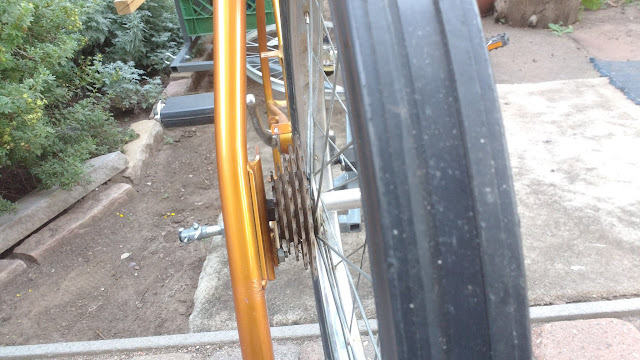 Not much space in there! You can see a small nut down below it, near the dropout. That was hitting the cog teeth, so we had to remove it and the brace attached to it. Since I will be mounting the whole bike on a movable steel frame, I don't need the brace. 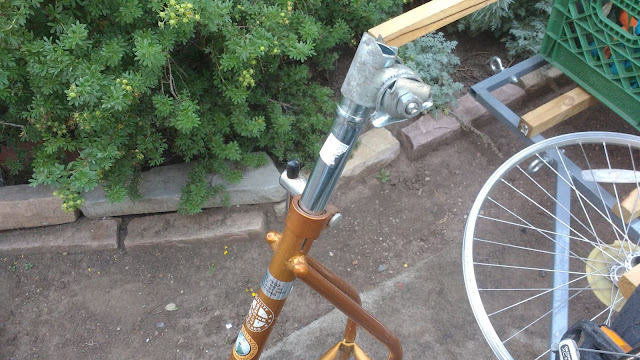 What I do need is a more supportive saddle, but Schwinn used a non-standard seat post diameter AND an old-style seat. Susan helped me pick out a seat post that will fit a modern-compatible seat clamp, and the seat clamp that will fit a modern mountain bike saddle which I'll try to get used for a song at another local shop that deals with a lot of new bikes. The original seat post will go to a tall friend who collects vintage Schwinns and needs the extra saddle height. 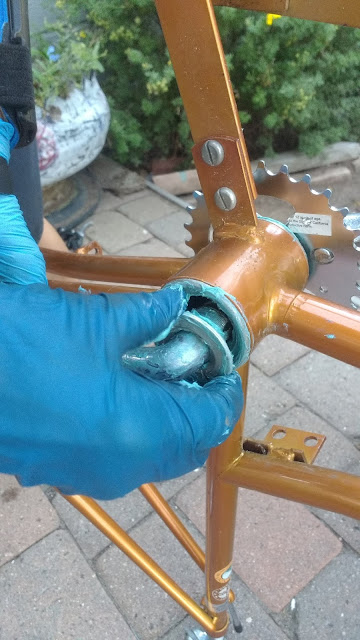 We fit a 28 tooth chainring to the one-piece crank and greased the bearings up nicely. 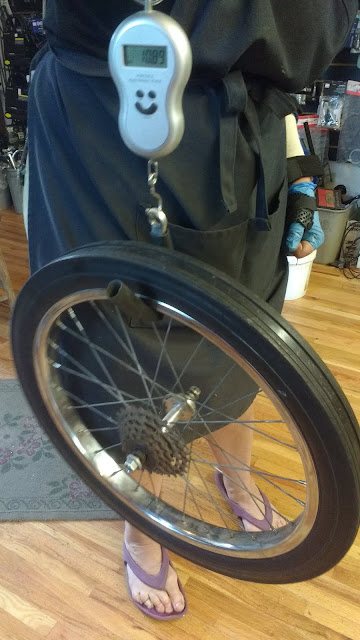 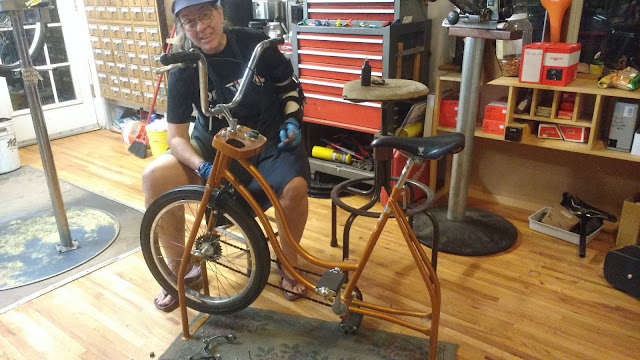 We put the wheel back on and ran a 5-speed chain on it. Then we had to figure out a solution to stop the wheel. The bike came stock with a Weinmann center pull brake mounted on the backside of the fork. Setting that up as a hand brake (instead of the tensioner setup) would have meant running the cable straight through the frame tubes, so that wouldn't work. Susan picked out a used Tektro side-pull brake, which means the cable runs off the side of the brake, away from the frame. I grabbed a nice aluminum brake lever out of the other used bin. She even grabbed some used Jag Wire cable housing, meaning that almost nothing on this bike is new! A used machine is pretty cheap and very eco-friendly, being that very little material had to be mined, processed, and manufactured for this machine. 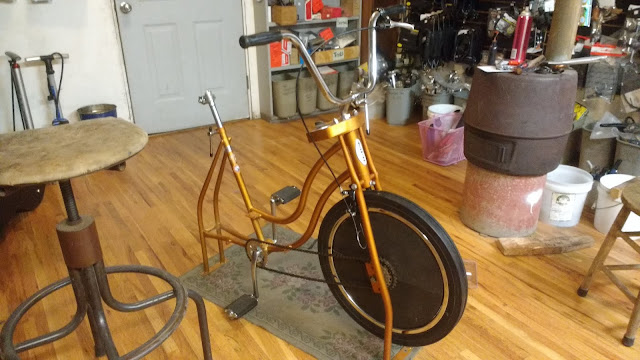 I'm going to have to mount a couple unsprung chain tensioners to deal with the extra long chains. I'll be mounting a used saddle to it, and the shredder will have to be mounted on a bracket to the 'dashboard' area. If I use a tensioner on the vertical chain to the shredder, I won't have to make the shredder position adjustable! But I'll probably have to figure out a different solution for the handlebars, since they and the stem might interfere with the shredder. It'll all come together...
on September 11, 2018 No comments: 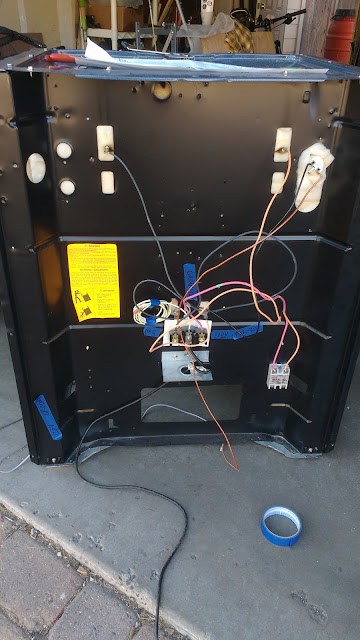 Ward came over yesterday to show me how to wire this oven! Not only is he on my thesis committee (along with Diana Stuart and Peter Friederici, the chair), I am working with him on my independent study for semester for help with the machines. Above is the backside of the oven. For the purpose of the compression machine the left side in the photo will be the bottom, and the right side will become the top. That way the heating elements will not interfere with the mold compression or jack shaft going through the new bottom side. The oven came as 220V but we will be running it off 110V for the time being.

Tour of the oven. The top two isolated wires go to the broiler heating element. The elongated hole with two wires on the top right is the oven light. The galvanized (grey) piece on the bottom center guides the power cord (a used computer power cord) up to the connector (with white insulator behind it). The small grey box on the bottom right is a relay, and the new temp controller will be mounted near the front of the oven, out of sight. 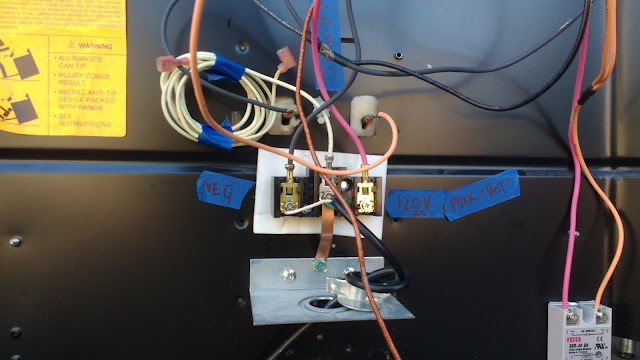 I really have no idea about wiring so this is a huge learning experience for me. 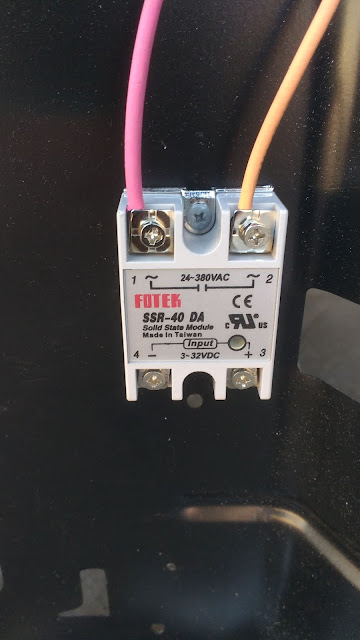 Here is the relay up close. We got it in a kit with a connector and thermostat sensor dealio. I'll post more photos as we hook them up. But it's coming along!
on September 11, 2018 No comments: