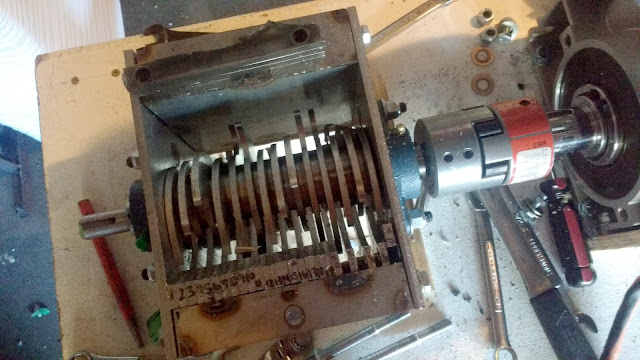 First of all, I decided to start rocking on the giant box full of HIPS that's been sitting in the living room. High-Impact Polystyrene (aka PS-HI) is a firm plastic that's less brittle than standard PS. I've been finding it in printers, where it does a great job in many parts. However it also does a really good job of jamming my shredder! This was the worst jam yet, making me disassemble the shredder enough to pull several spacers out. You can see them sitting on the shredder.

I also looked at a recurring problem I've been having- that of ruining the elastomers in my Lovejoy coupler (red-orange thing at right). The coupler has been properly spaced but still has eaten that black elastomer spider, resulting in $30 of expense for a new spider as well as about a week of downtime before I could buy a new one.

I realized the thing HAS been going out of alignment, but not because of bad adjustment. The table has actually been flexing upward when the shredder encounters high resistance. To solve this problem and stop spending money, I threw some short 2x4 braces into the middle of the table. 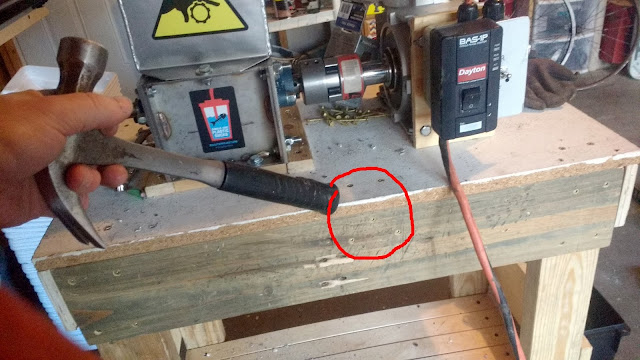 Here you can see the five screws I sent through the table. These line up with the coupler.

Below is a view from underneath the table. On left is the blue piece of aluminum that braces the motor. On right of course is the shredder, and at the bottom you can see that short bit of 2x4 recycled from a part of last year's 4P project. I could send a 2x4 all the way across underneath the table, but it would be more work. We'll see if this works, and if not I'll figure something else out. 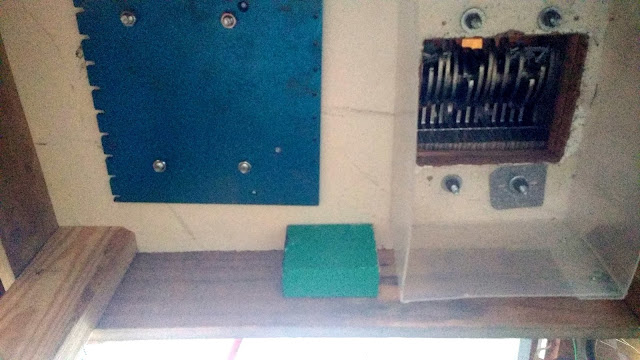 I did a little more shredding after that and noticed that it did reduce flexing on the coupler. However the motor and gearbox tend to flex. I'm not sure how to fix that except for bracing near the bolt holes. If that became a problem I might look into steel tabletops. I don't anticipate having to do all that though. It seems like it'll work fine.
on March 13, 2019