Sand Casting is a complex process for someone like me (and likely you) who has never done it before. Here's the quick rundown. 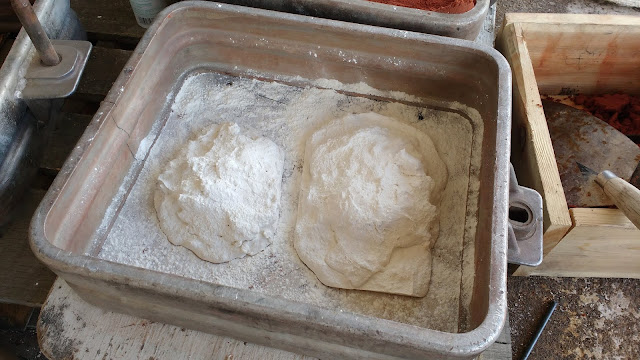 1. Remember those plaster casts of the clay parts? Flip those upside down on a board and put the bottom half of the sand box (called a flask? I'll call it a box) upside down as well. Sprinkle it liberally with baby powder as a mold release. 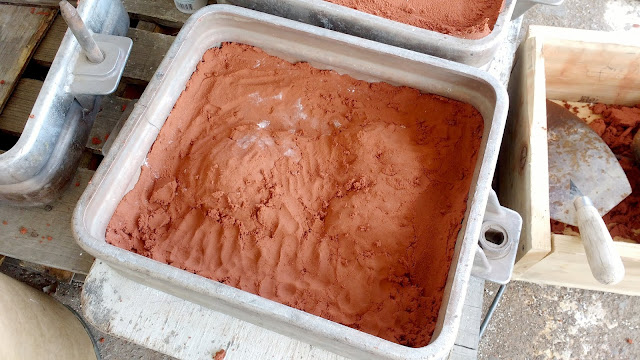 2. Pack foundry sand/casting sand in, about an inch in depth at a time. Push it down with your fingers and then pack it in with a small tamper. All the air holes need to be gone. Keep packing sand until it's up to the top, then level it. 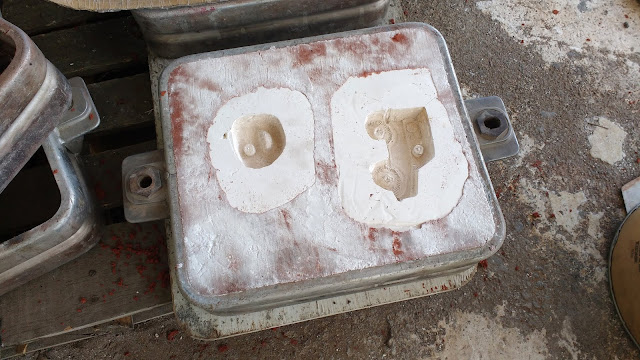 3. Flip this half of the box upside down. We can see the sand is packed tightly enough that it stays in place and the female side of each plaster mold is visible and upright. 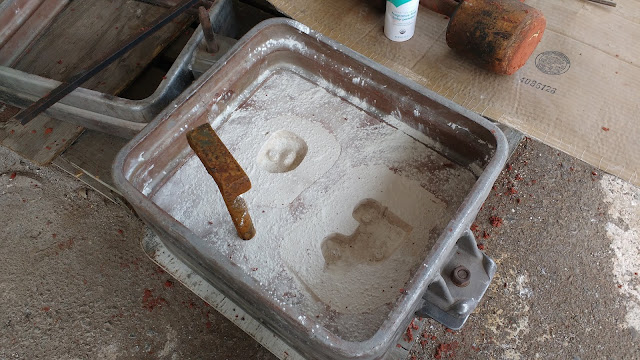 4. Stack on the second half of the box and dust liberally with baby powder again. This is a good time to plan where you will pour the aluminum. To make the pour hole I put the pipe end of a crude hammer down. In a later step we will make channels to feed the two parts. Later we will also make vent holes. 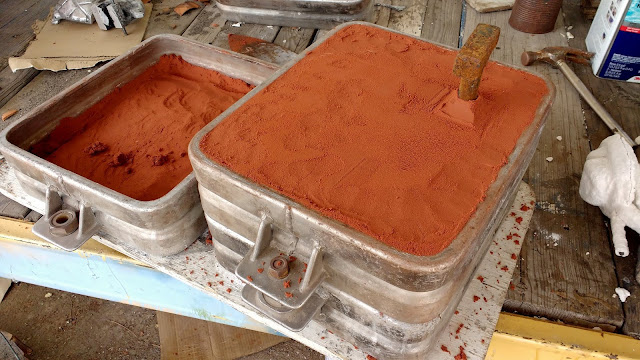 5. With the pour/feed hole set in, pack the sand in, being careful to completely fill the plaster molds. Keep packing layer by layer until this one too is level. Now the entire box is filled with packed sand- almost 100 pounds (45 kg) of it! In the middle of course are the two plaster molds ensconced in baby powder, with a thin layer of baby powder also separating both boxes of sand.

Next Steps: I write this on Thursday. On Monday I will be pulling these apart, punching in vent holes, adding feed runners between the parts, refining the feed hole, and (with luck on my side) pouring aluminum! After that I'll be packing the other box with three other plaster molds. I'm hoping that I will be able to pour at about 9am, remove the sand, pack it into the second box, and pour again before leaving around 3pm. At that point I could walk home and do any finish work on the aluminum using a Dremel and other tools. Wish me luck!
on April 11, 2019